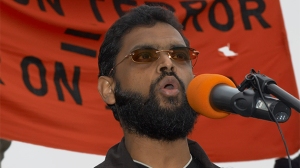 The UK courts have dropped all the terror charges against our brother Moazzam Begg. He was ‘conspicuously’ arrested in January this year, only a few months after coming back from Syria where he was investigating the history of intelligence relationship between the UK government and Syria, in renditioning of terror suspects to Syria (by the Mi5) for torture.

The UK government apparently accused him of supporting Terrorism by ‘providing use of an air conditioner’ for use by ‘terrorists’, and ‘helping terrorists’ with some physical exercises (because as you all know, the terrorists most deadly weapon are star jumps…).

In theory, the UK provides ‘freedom of speech’ and ‘freedom’ for people to account the government, and dissent with it. However in practice, the UK works no different to most other regimes in the world who don’t bother to pretend they have freedom. Sisi’s Egypt being one such case – where journalists who report on the crimes of the regime are locked up on ‘terror charges’. Sometimes even in the ‘unfree’ regimes, they are released after having their lives disrupted (like Moazzam has) or perhaps as a warning, but sometimes they don’t get to be released.

The UK prosecution service (CPS) stated that there was evidence to prosecute Moazzam at the start, but they’ve had to release him because ‘new evidence has come to light’. To prevent any further discussion of what this ‘new evidence’ (excuse) is, they said:

“I understand this is going to raise many questions. However, explaining what this newly revealed information is would mean discussing other aspects of the case which would be unfair and inappropriate as they are no longer going to be tested in court”

Moazzam Begg works for Cage (formerly ‘Cage Prisoners’), a Muslim rights organisation that has campaigned tirelessly to try to get Muslims a fair trial in the UK and U.S. They were responsible for bringing the plight of Aafia Siddiqui to light. I urge you all to support them, for the next person charged by the UK government, could be you…

To read more of the story, click the below links.