Home › Current Affairs › TV: The arrest of Anjem Choudary, the fight against ISIS, and Anti-Terror measures against the Muslim community in the West (The Report, Islam Channel)

TV: The arrest of Anjem Choudary, the fight against ISIS, and Anti-Terror measures against the Muslim community in the West (The Report, Islam Channel) 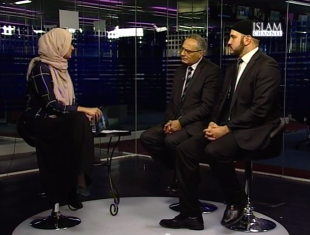 I appeared on Islam Channel (UK) on ‘The Report’ discussing these above topics with Julian Richards, Senior Lecturer in Security Studies, Centre for Security and Intelligence Studies, University of Buckingham, Dr Wafik Moustafa, advocate for Secularism in the Middle East, Chairman of Conservative Arab Network. President of British Arab Med Assoc Chairman of Egyptian Community Assoc UK. [Taji Mustafa, from Hizb ul Tahrir appearing separately in the first segment of the program to talk about other issues].

In the program I discussed the arrests of Anjem Choudary and his colleague, Abu Rumaysah, and raise the question ‘why now?’. They apparently were arrested under suspicion of being members or supporting this former banned group ‘Al Muhajiroun’. However, Anjem Choudary or Abu Rumaysah have demonstrated in the past enough legal acumen to conduct their activities within the law.

With the impending vote in the UK parliament over bombing ISIS in Iraq, and the raising of the official ‘threat level’ by the British government – we need to ask questions regarding why only now is Anjem Choudary being arrested from a crime, if true, that would have seen him arrested years ago? Is it politically motivated? Is he no longer useful anymore free than locked up? If so, why did the police suspend the arrest till now? Did they allow Anjem Choudary years of leeway to make unwise provocative statements to serve their own purposes? It must be remembered, that according to the reports, Anjem and Abu Rumaysah ‘didn’t pose an immediate threat’, and have stated many times that Muslims in the West are under a covenant of security and cannot commit acts of Terrorism. Indeed, after ISIS’s (UNISLAMIC) call to Muslims in Western countries to commit terror acts – I personally challenged ISIS apologist Abu Rumaysah on Twitter on this – and he responded by re-stating the Islamic line that Muslims are forbidden to commit acts of terrorism/violence in the West under the covenant of Security.

On the show I expressed my long documented strong disagreement to Anjem and Abu Rumaysah’s usual provocative statements to the Press, and admit that they have been very useful for Islamophobes and others. However, it is important to ask questions about why they were arrested for possibly a very old and known suspicion. What is the evidence? and if proven, why now? We should not let our strong dislike for their activities and statements permit us to support a possible injustice here or overlook the a possible government exercise of arbitrary power which could one day mean any Muslim in the UK could be arrested for expressing ideas that UK politicians deem unfashionable. We should fear to live in a country when saying deeply unpopular opinions can get you imprisoned. Indeed we should be fearful, for now mainstream Islamic opinions are beginning more and more to be viewed as controversial, not just Anjem Choudary’s – and when the day comes that Islam itself is openly deemed an affront to preach in the West, it won’t be just Anjem they come for, but all of us.

In this segment I also rebuke my co-panellist, the Arab Secularist Dr Wafik Mustafa, who made the mistake of saying that Islam should be reformed, and secular government is the solution to the Muslim world.

Part 3 (The arrest of Anjem Choudary, and Western domestic anti-terror measures against the Muslim community)

In this segment of the program, I challenge Julian Richards on these points and respond to his less than convincing answers. UPDATE: After the UK parliamentary vote on strikes against ISIS in Iraq, Anjem Choudary has now been curiously released.