The rights organisation, CAGE, has issued an urgent call to demonstrate against the politically motivated incarceration of Moazzam Begg,  a former-prisoner of Guantanamo Bay, who upon release, became an active voice for all prisoners of political conscience, unfairly locked up in the name of the ‘war on terror’. He recently had his passport confiscated,  after his publicly documented travel to Syria to investigate UK complicity in torture of prisoners with the Syrian regime. He has now been arrested and charged with ‘providing terrorist training and funding terrorism overseas’.

Tomorrow CAGE has organised a demonstration in London, against his incarceration, we ask all people of conscience to attend and protest against the UK government’s detention of political dissenters and individuals of conscience.

Join us this Sunday (2 March 2014) at 1.30 pm to demonstrate against the unjust arrest and detention of Moazzam Begg (CAGE’s Outreach Director) who has been targeted for exposing British complicity in torture and rendition.

CAGE condemns the persecution of the Muslim community and will protest against the governments criminalisation of activism, penalising ideologies, and reducing humanitarian aid to a ‘terrorist’ offence. 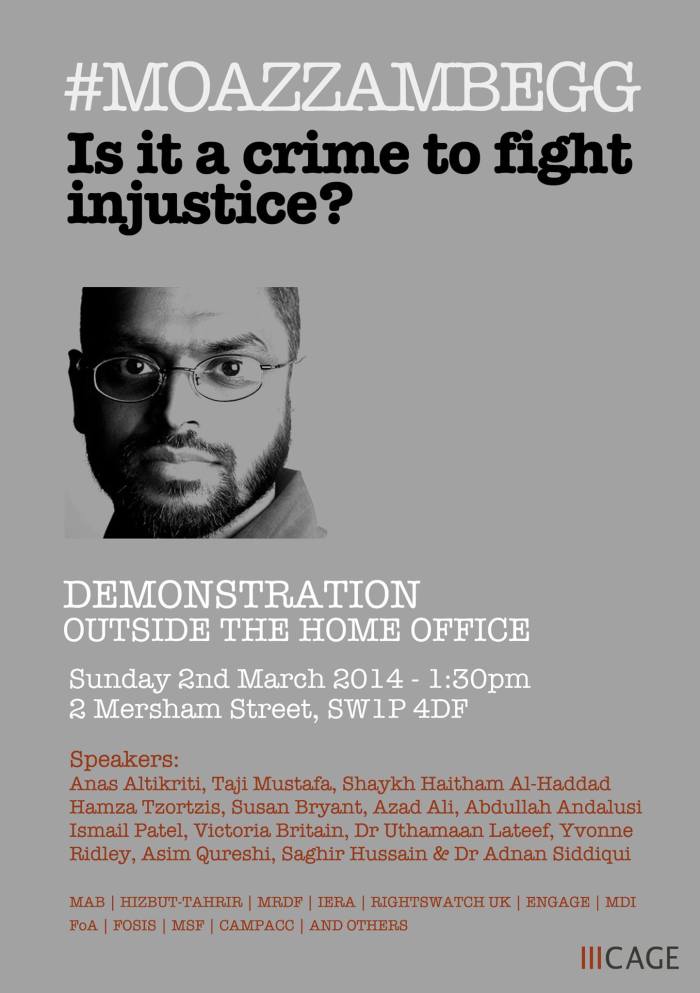 Like Loading...
‹ UK DEBATE: Sharia vs Secular Liberal Democracy – which is more tolerant?
Lecture at University of Leicester on ‘Misconceptions of Islam’ ›