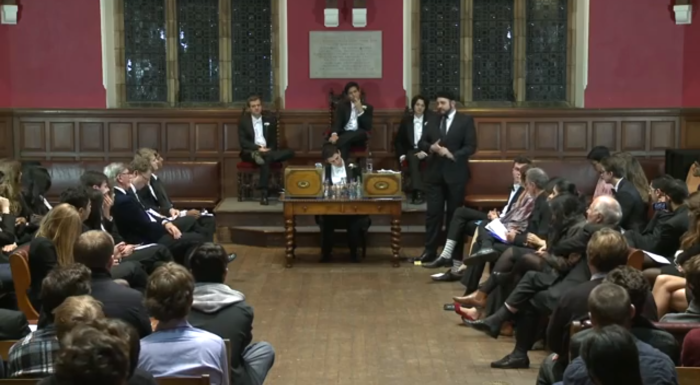 My Oxford Union have uploaded the video of the debate ‘This House is proud to be Patriotic’, that was held at the Oxford Union on 14th November 2013, Oxford University.

The Oxford Union is the world’s most prestigious debating society, with an unparalleled reputation for bringing international guests and speakers to Oxford. It has been established for 190 years, aiming to promote debate and discussion not just in Oxford University, but across the globe. The debates at the Union consequently are highly acclaimed, with many student debaters and speakers becoming UK, and world, politicians, thinkers and writers.

The debate featured a team of four invited speakers arguing for the motion, and four invited speakers arguing against the motion. MDI’s Abdullah al Andalusi was invited to speak against the motion. After the debate, there was a vote, with the motion ‘This House is proud to be Patriotic’ being defeated. A notable victory for the team arguing against Patriotism, and in doing so, affirming the rational understanding that all humans are of equal concern and equal brotherhood and sisterhood (which is the Islamic view).

The debate has been uploaded in eight 7-10 video segments. Abdullah al Andalusi is the 6th speaker (and 6th video below), if you wish to jump straight to his contribution, then please see Varun Sivaram’s video below (first video), and Jonathan’s (fifth video)  since some of Abdullah’s refutations were directed towards Varun and Jonathan Freedland.

Oxford Union Debate – ‘This House is proud to be Patriotic’

A Rhodes Scholar and former Senior Advisor to the Mayor of Los Angeles.

Studies History at Oxford University and is a mentor for the Debate Mate programme.

Supporter of Conservative Party, and Student at Oxford University

Founder and Executive Director of the Jewish Council for Racial Equality.

A British journalist, who writes a weekly column for The Guardian and a monthly piece for The Jewish Chronicle. He is also a regular contributor to The New York Times and The New York Review of Books, and presents BBC Radio 4’s contemporary history series, The Long View.

An international speaker, thinker and intellectual activist for Islam and Muslim affairs. His work involves explaining and demonstrating, by rational argument, the intellectual proofs for the Islamic belief system, and promoting the Islamic way of life and Islamic solutions for contemporary problems.

William Nigel Paul Cash is a British Conservative politician and Member of Parliament for the constituency of Stone, UK.

Like Loading...
‹ Upcoming Debate on Is it right for Secular Society to limit religious expression?
A Brief Reflection: Everyone mixes religion and politics ›