Home › WRITINGS › EVENT REVIEWS › My Review of the BBC Big Questions topic ‘Do British Muslims have problems with Apostates’?

My Review of the BBC Big Questions topic ‘Do British Muslims have problems with Apostates’? 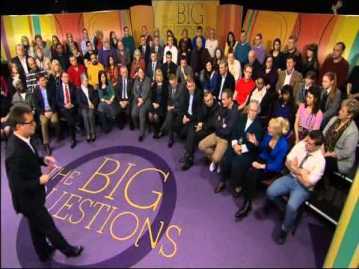 I’ve just finished the BBC ‘Big Questions’ program. It was, as expected, an anti-Islam fest, attacking Muslim families for not accepting children to leave Islam (despite lots of cases of non-Muslim families rejecting their children for becoming Muslim). They gave the discussion to an Ex-Muslim ‘Amal’, whom was given the lions share of time to attack Islam and Muslims, and ample time afterwards – so much so, it almost became the ‘Amal Show’

Predictably when it came to me, Nicky Campbell first asked the ‘yes or no question’, about whether I believed in a ‘apostasy law’. I responded robustly that I reject the translation ‘apostasy’, and they didn’t like it – not one bit. I approached the topic from outside the box that they wanted me to stay in.

They asked the question, knowing full well that they would sideline the entire discussion I wanted to have, after my answer.

During this segment of the program, I was only allowed to speak three very short times – and only after I was asked very limited ‘yes or no’ questions. I managed to make two quick points that last brief seconds before they were shut down by Nicky or Nicky moving the mic back to ‘Amal’ for another long speech.

The first point was, that the title of the ‘Big Question’ is tritely and unoriginally another attack on the Muslim community in the UK: ‘Do British Muslims have a problem with apostates?’. It serves to further fuel the demonisation of Islam and Muslims in the UK – leading to more anti-Muslim social ostracism (which they were so upset about happening to ex-muslims!).

Why do they say we have a problem with apostates? Because Muslim families don’t react well to their children leaving Islam? If that is the case, why not also mention English people or people from non-christian faith communities who also have a problem with their children becoming Muslim? According to reports, the treatment of them is exactly the same (if not worse in a majority non-Muslim society with a hostile media). Why the focus only on Muslims? At very worst, all that can be argued, is that many Muslim families behave the same way many other families behave in the UK.

The second point I made was that it was anti-Muslim and disingenuous to discuss Islamic State law and connect it to the issue of Britain. 0 ex-Muslims have been killed in the UK, that’s right 0 – so how does this relate to so-called death penalties claimed of Islamic law? It significantly demonises the Muslim community, and endangers them, to suggest that a common human problem amongst all families is somehow, when occurring amongst Muslims, influenced by death penalty laws. This blatantly anti-Muslim argument is hate inducing bigotry worthy of Tommy Robinson (formerly) of the EDL.

The points I made were valid, but I was accused of being ‘slippery’ and avoiding answering the question. No, considering how little time Muslims get to answer points on the show, I was actually trying to make the points I came on the show to make. I made those points, and still humoured Nicky Campbell’s questions.

The question ‘under an Islamic State, in the right sharia conditions…do you think some should be put to death for apostasy’ is a shibboleth invented by Maajid Nawaz, who wanted to catch out Muslims, and however a Muslim answered, they would have had the rest of their opinions ignored and dismissed under either a flurry of fuming Liberal outrage, or demands to then condemn Islam, followed in quick succession by Muslims who disagree. However, I disappointed the anti-Muslim mob by rejecting the false basis for the question, namely, the incorrect English translation and understanding.

I think its time Muslims defined Islam for themselves, and not let the West define it for us. Apostasy (in the modern world) means for someone to change their minds about religion in their mind. This is not what is punished under Irtidad laws. The Prophet Muhammed (saaw) knew who were the apostates and didn’t kill them. Apostates under an Islamic state is better translated as ‘nifaq’. What the Irtidad laws punish is actions – like speech and proclamations which are understood to be seditious/renegade/treasonous in an Islamic State, or physical actions which are the same (like fighting, or helping enemies). Intellectual debate and criticism of Islam – to be clear – is not viewed as seditious etc, since Muslims held many debates with people of different religions, during the many Caliphates. However, the best translation of how classical Islamic scholars understood what Irtidad is and represents, is ‘sedition’ and ‘treason’ – the latter of which potentially carries the death penalty in some states in the U.S. It’s time we end using victorian-era English translations for traditional Islamic concepts. There is nothing in Islamic Fiqh that requires us to us the English word ‘apostate’ – in fact, it could be against fiqh to do so, since fiqh requires we explain Islam accurately.

As Muslims we should not have to change a single Islamic law to please anyone, or anybody – however, we should try to improve the accuracy of translating Islamic concepts into the English language. The issue I take is translation. Therefore, I think we should all reject the english translation of ‘irtidad’ as ‘apostasy’ – just like I reject the claim that Islam has a anti-‘homosexual’ law – which is merely a individual that has feelings for same gender. This should not to be confused with same-sex intercourse, which is an action that is prohibited under Islamic law- regardless of the sexual preference of the person committing it. [Btw – only public exhibitions of illegal sexual intercourse are punished by an Islamic State, private acts are forbidden too, but are accountable to God alone). ‘Homosexual’ is, again, another Victorian-era word Muslims have unwisely used, which has led to much misunderstanding. Let’s stick to Classical Islamic terms, and decide ourselves how best to translate them into English, and not yield it to Western pundits – some of whom will merely project their own misunderstandings onto our Deen.

For my efforts, I was called ‘slippery’ by the anti-Muslim lynch mob, more out of their frustration than because I didn’t answer the ‘Muslim Test Checklist’ that was posed to me in the way they wanted – despite my answers being clear and unequivocal. In fact I answered, and answered again the question, with no comebacks from my detractors. They wheeled on the ‘ex-Muslim’ called ‘Amal’, who evidently was still obsessed with the religion she left behind. She ranted and interrupted me many times, shouting over me (the only way to respond to my points it seems), however, with what little time I was allowed to speak I continued to make my points, clearly – and point out the problems with the show, and the double standards by which they judge Muslim families for something practiced by alot of wider society.

Of course, the ex-Muslim ‘Amal’ was given a large amount of time to, without any reference, or any rational argument, simply spew assertions that I was lying (or doing ‘taqiyya’ lol), which is the best she could do. She left Islam due to ignorance, so it makes sense that she can only defend that decision by further words of ignorance. They then asked me to condemn Haitham al Haddad insultingly as ‘a bigot’ for his alleged words and opinions, because I had shared a platform with him. I asked them that if they are so interested in accounting him for his words, than invite him onto their show and let him defend himself – not do the cowardly thing, and ask someone who happened to share a platform with him to do so. I’ve shared a platform with many people, Christians, Atheists, Modernists and Feminists. I argued on the same team as Gay Rights and Human Rights Activist, Peter Tatchell, against Patriotism, at the Oxford Union – does that mean I support him or agree with him, or even know, all his other views because I’ve never condemned him? No. Furthermore, we hear much furore from Liberals who tell people not to ‘judge others’, or ‘only God know’s their heart’ as Modernists like to say – yet when it comes to Muslims, we get no such gentlemanly treatment.

I was asked by another guest, what I thought of FGM – I flatly condemned it. However, I’ve pointed out in the past, that in the West, Women go to plastic surgeries to get ‘labioplasties’ – which effectively mutilate female genitals for aesthetic reasons. It would seem, the West doesn’t actually mind FGM as long as it’s consensual! (perhaps they should rename the crime ‘non-consensual FGM’?!).

Another Muslim panellist, Mohammed Shafiq, was attacked with the demand as to why he criticised Maajid Nawaz for retweeting a cartoon of the Prophet (saaw). What relation this had to do with ‘apostasy’ and British Muslim families, I do not know. Needless to say, me and Br Shafiq were intended to be targets in the show, not guests. We didn’t oblige them. Mohammed even pointed out that Amal was ridiculously been given a lot of time, while the two Muslims voices were reduced to just answering ‘yes or no’ questions.

It seems that all they want Muslims to do in public, is agree to their checklist of acceptable (Secular Liberal) beliefs and doctrines, and condemn those people they hate – other than that, our beliefs, opinions, criticisms, including all their subtleties and nuances – they don’t want to hear. And when a Muslim takes the time to bring their own opinions to the table, they condemn them as ‘slippery’, for not immediately and exclusively answering the checklist set of questions they’re only interested in hearing about. In some of the last moments, I had to *forcefully* enter the conversation to speak, I pointed out that the proceedings of this ‘debate’ is not an open and fair discussion that gives people a chance to truly express their point of view, but  proceedings worthy of an Inquisition Court.

After the show, as I was walking out, one of the audience attendees, an english non-Muslim approached me. He said ‘I don’t agree with everything you believe, but they were quite unfair on you, not giving you much time, attacking you and not letting you speak’.

Of course that’s TV, all programs have an agenda, and when the agenda is weak, not letting people with opposing ideas get an equal chance to speak is their best weapon.

The ‘big question’ of the program was ‘Do British Muslims have a problem with apostates?’ – I said no we don’t have a problem in Britain with apostates. But the Islamophobes were more interested in asking about sharia law in a hypothetical Islamic State. They later try to claim I was avoiding the question, yet I was the only one who wasn’t avoiding the actual question.

UPDATE: The video of the full program can be found here.