FEMEN and the nature of Feminism

In their vain attempt to distance Feminism from FEMENs actions, some pro-Feminist advocates have dismissed FEMEN as merely being ‘Feminist extremists’, and not representing ‘true’ Feminism.

But who’s to say that FEMEN doesn’t represent feminism? Unlike Islam, Feminism isn’t based upon a holy book, or common reference text, so who decides what is Feminism, and what isn’t?

However, the intellectual tradition of feminism follows a common principle/creed, the ‘liberation of the individual woman’ (e.g. Individualism), and therefore it would naturally conclude that the rules and restrictions of religion, inhibit women’s freedom to define their own morals and values. In fact, the public display of nudity by FEMEN is a protest against the Islamic doctrine of public modesty – which Feminism considers to be an unjust restriction of women’s ‘freedon’. Under Feminism, if women can choose to wear what they want, and ‘their body belongs to them’, how are FEMEN going against Feminism by choosing to go topless?

Last, and by no means least, the Islamic organisation of the family with the husband role as holding primary responsibility for the safety, security and physical wellbeing of the family, would be judged by Feminism as ‘patriarchal’, and thus an enemy of feminism. So of course we would expect FEMEN to hate Islam, and protest against it’s concepts.

Not all Feminists agree with the methodology of FEMEN, but they certainly share the same principles (Read Sr. Zara Faris’ article on Femen and Feminism), the difference is the means of protest, not the ‘whys’.

So you see, in the Feminist community, FEMEN aren’t extremists, they’re just ahead of the curve. 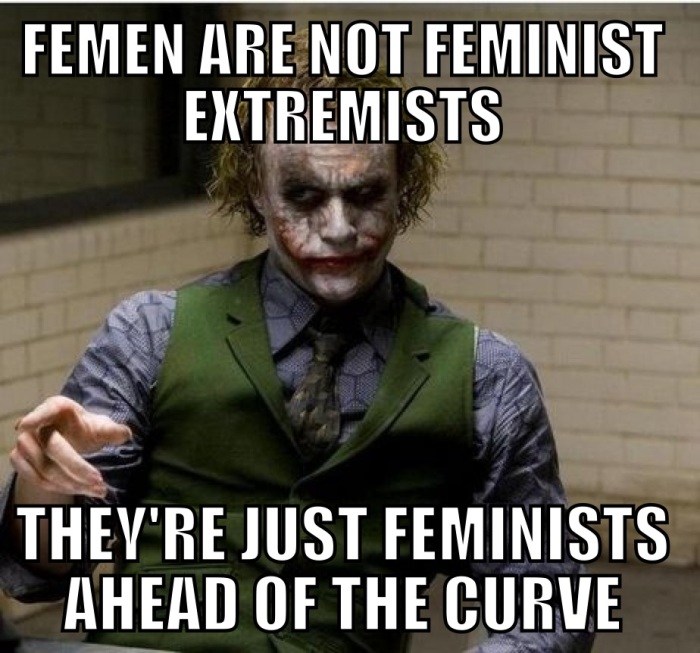