Home › Uncategorized › An Amazing debate late night in Melbourne on ‘Can you Justify being Good without God?’

An Amazing debate late night in Melbourne on ‘Can you Justify being Good without God?’

It’s the day after my debate last night at the campus of Monash University (Melbourne, Australia), and I really must thank the three MSAs of three universities that collaborated to invite me and organise the debate, The Swinburne, Monash and Victoria university MSAs. Congratulations on a packed turnout, and well organised event! (pictures and debate video to come soon Inshallah).

My opponent, Matthew McArthur was an enjoyable intellectual sparring partner, using high level argumentation and discourse – not pulling any punches, but strongly fighting his corner. My opinion of Atheists so far in Australia has been a very positive one! Matthew told me that he also enjoyed the debate, and remarked it was one of the best debates on morality he has participated in (his previous ones were against some local Christian speakers, and they reportedly became very defensive and heated). That being said, I deployed some brand new arguments and new angles instead of the usual bulk standard ‘Atheism & morality’ debate arguments, and this allowed some very interesting and novel discussions.

Matthew used an argument from Kantian Ethics to justify morality, which I rebutted by demonstrating the fallacies behind Immanuel Kant’s propositions. The debate then became one where Matthew conceded that any higher objective morality outside the human mind doesn’t exist, but he argued that humans could create a consistent set of morals based upon the human desire for safety, security and justice, we can all follow.

I pointed out that if morals are based upon Human desires, these are inconsistent and ultimately will depend on how convenient each human finds ‘following the rules’. The debate, I reminded everyone, was not about ‘can humans be good without believing in god’, nor ‘Does belief in God prevent a human from being bad’, but rather the debate is ‘can you JUSTIFY being Good without God’. And to that, I pointed out that Human Convenience is a capricious and mercurial ‘god’. For the rights that human convenience gives, can equally be taken away when not convenient (to which I gave an example of the right to privacy being taken away by ever increasingly menacing Western security apparatus, in the name of ‘national security’. I also gave the example of mainstream Western Political Philosophers writing books horrifically justifying terrorism and the targeting of civilians when deemed ‘necessary’ to fulfil the objectives of Political Liberalism [see doctrine of: ‘Supreme Emergency Exemption‘]. I also cited Sam Harris’ defence of torture ‘when necessary’).

I argued that in the end, only the belief in success in this life and the next by sticking to following what is right, which is promised in revelation to believers in God – despite it appearing inconvenient or counter-intuitive to do so, is the only way we can have a consistent morality that can be justified in all times and places, no matter what the situation. 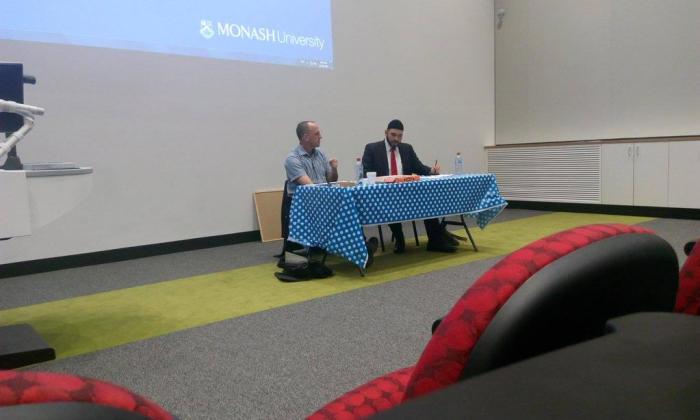 Like Loading...
‹ MELBOURNE Debate: Islam vs Atheism: ‘Can You JUSTIFY being Good without God?’
LECTURE VIDEO: The Prophet Muhammed (saaw): Kryptonite against Human Corruption ›