Public Discussion: ‘Does Religion have a place in the 21st Century?’ [Manchester University, 10th March 2015]

‘A discussion event between the wider society (muslims and non-Muslims) conferring about the
notion:

‘Does religion play a role in society within the 21st century?’

On the panel there will be 4 members of the panellists”

Abdullah Al Andalusi, from the Muslim Debate Initiative, is an Islamic activist, thinker and
international speaker.

This event aims to educate the public regarding principles of the different religions in today’s society
and whether or not religion is compatible with contemporary culture and lifestyle. Each of the panellists will deliver a short speech consisting of arguments that either promote or oppose the
possibility of the integration of religion into modern society.

Following the speeches, there will also be a Q&A session where the speakers will be able to
elaborate on specific aspects of their arguments, as directed by the audience.
The event will take place on the 10th of March 2015, 6-8PM in The Auditorium, St Peters House, Precint Centre, M13 9GH.

Everyone is welcome and we encourage people from all backgrounds to attend and explore this notion with us. 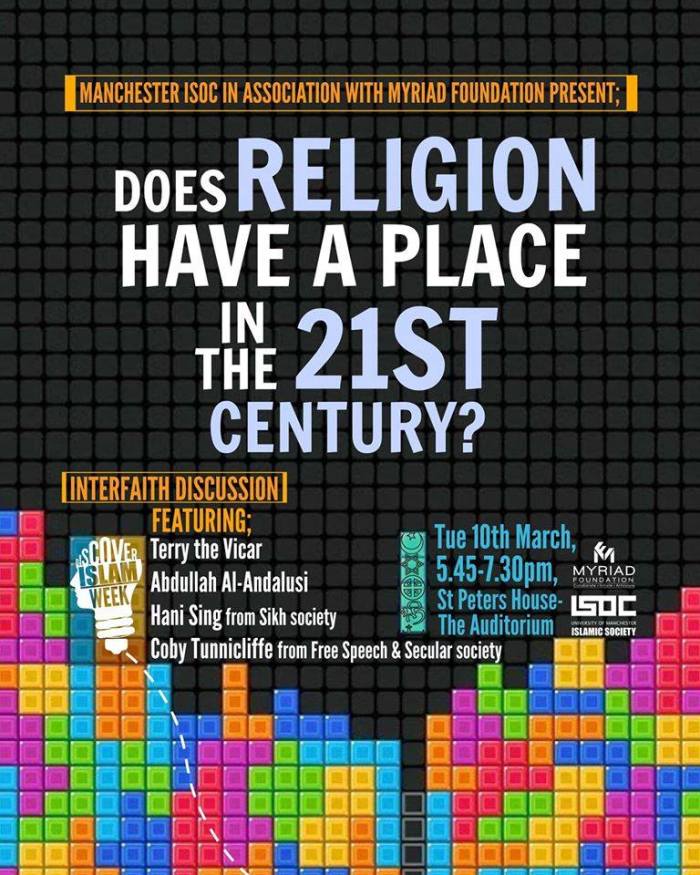