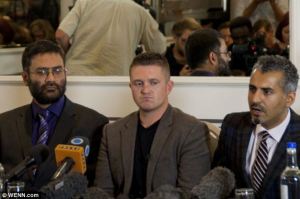 Lo and behold, Tommy Robinson, the leader of the ‘anti-Islamic’ English Defence League (EDL) has left the EDL (a fractured and difficult to control group) and joined the UK government funded ‘anti-extremist’ group, the ironically titled ‘Quilliam foundation’.

The ‘Quilliam foundation’ based their name around an early Victorian convert to Islam, William ‘Abdullah’ Quilliam, who built the first mosque in the UK. The Irony is, that Quilliam believed in the Ottoman Caliphate, and called Muslims in Victorian Britain to be loyal to the Islamic Caliphate, over that of the British Empire! That’s right, the ‘anti-extremist’ Quilliam foundation named themselves after a man, who they’d probably call ‘extremist’ themselves! That’s like American anti-black white supremacists naming themselves ‘The Malcolm X Foundation’!

This is not the first time a failed leader has joined the Quilliam foundation.

For example, the founder of the Quilliam Foundation, Maajid Nawaz, a former member of International Islamic group, Hizb ul Tahrir (HT), left HT according to reports, when his bid to gain leadership of the UK branch failed. Perhaps believing he deserved some kind of reward for spending a few years in an Egyptian prison. Possibly because HT do not use leadership as a privilege or a reward and do not aggrandise their leaders, this probably frustrated Maajid who might have been expecting a higher position. Maajid then left HT and made a 180 degree turn on his beliefs, claiming that he had changed his mind about going against the Muslim ‘rulers’, and belief in the Caliphate, while he was in Egyptian prison! Strangely, this was despite the fact that when he returned back to the UK after his prison release, he continued to be a member of HT and was a speaker in an HT organised protest outside the Egyptian embassy, where he strongly denounced Hosni Mubarak more than ever before!

Another example is the current Quilliam member Usama Hasan, known amongst the Muslim community as a fallen Muslim, who advocates reformation of Islam and modernism. After the committee of the Masjid Tawheed (Leyton, London) rose up and deposed him and his family’s domination over the Mosque, he publicly denounced the Mosque for ‘extremism’ in the mainstream media [which used the story to tar the Muslim community in the UK – again], and he reported the Mosque’s so-called ‘extremism’ to the Charities Commission (which has so far failed to find any ‘extremism’). Once his bid to retain power failed, he left and joined the Quilliam Foundation.

The Quilliam foundation’s welcome of Tommy Robinson reminds me of Saudi Arabia’s refuge policy towards former failed dictators. And so Tommy Robinson is the latest recruit. No doubt the Quilliam Foundation were hoping the get their public profile back up, after the UK government cut their funding due to their abysmal failure to win the ‘hearts and minds’ of the Muslim community in the UK, under a reformist agenda.

The media portray the EDL as a far-right group, who are racist and fascist. But the EDL are ‘useful idiots’ for the UK government’s anti-extremism plan. The EDL put pressure on the Muslim community in their quest against ‘Islamism’, however, all Muslims know that in reality it is Islam that they hate. However, Muslims are defended by Liberals who explain to us that ‘the EDL are wrong because they think your religion has a political aspect to it, so don’t ‘play into their hands’ by confirming it’.

This then exposes the reality of the intolerance of Liberal Western states. For Muslims are only protected if they agree to renounce their beliefs in the holistic (and original) Islam, and adopt a neutered and lobotomised ‘secular-compliant’ version, limiting Islam to purely a set of spiritual beliefs, morals and ritual worships.

To reinforce this agenda, the government attempts to monitor, regulate and control Mosque Imams, Muslim speakers who speak at universities (for example, brother Hamza Tzortzis and Abdul-Raheem Green were banned from speaking at London universities – you know universities, those ‘pillars of intellectual free speech’ right?), and of course, the government funding of groups like the Quilliam, whose mission is to dictate to Muslims a ‘reformed’ Islam, compatible with the Western worldview.

Isn’t it ironic – Secularism is touted to Muslims as a separation of religion from politics in order for people who follow a religion to be free from interference by the government, however virtually all Secular countries in the world with sizable Muslim populations, including ‘Muslim’ ones, all have programs to regulate, influence and control the understanding of Islam as believed by the Muslims in their countries.

It came to me, when I was thinking about whether Geert Wilders was a fascist, that he actually is not. He’s just a Liberal, who believes the Islam won’t capitulate like Christianity did. Once a Liberal believes that, then the true intolerant side of Liberalism comes out. Until then, all ‘friendly’ Liberals, either don’t understand Islam, or they have faith that ‘in time’ Islam will bend to it like the other religions, and so there is no need to get rough with it [of course, Liberalism and Fascism are not actually two different ideologies – Fascism is more the next logical step for Liberalism, rather than an aberration].

But what if Islam’s only and true form is a complete way of life, with spiritual, social and political aspects guiding and defining everything from personal conduct to political government? Would that justify the EDL, Geert Wilders and the militant Liberals/fascists? Cannot Muslims live in peace without having their religious beliefs scrutinised and subject to UK government regulation – and interference? Apparently not.

As the saying goes: ‘Birds of the same feather, flock together’.