The Patient Noose of Western ‘Tolerance’

The reality of Western Liberal ‘Tolerance’, is similar to a patient executioner. The West – holding the belief in Secular Liberalism – views all beliefs systems that are fundamentally different to itself as an enemy and rival. The history of Western Liberalism has shown it consistently executing, eradicating and castrating all resistant beliefs to its world order and vision. Secular Liberals have declared enmity, distrust and actively persecuted many beliefs and worldviews held by minorities amongst it in its the past, Catholicism, Islam and Communism. All falling before it into Secular Liberal compliant versions, except one.

After world war 2, Muslims from lands the West had previously defeated, occupied and indoctrinated under Colonialism, immigrated to the West to supply it with cheap labour to rebuild its infrastructure. However, something unintended and unforeseen happened, the children of these Muslim immigrants became educated and subsequently rediscovered their ideological heritage. It was then Liberalism’s pretension to freedom of conscience and expression was tested again in its history, and again, exposed as a facade. When faced with an un-Secularised and non-Liberal worldview, the lack of an initial reaction by Secular Liberal governments became confused for ‘tolerance’. However, in such situations, the Western concept of tolerance is merely the delayed onset of its intolerance. The West only allows itself to be tolerant, towards the different Secular Liberal schools of thought, but none outside it. To them, it ‘mercifully’ gives people time to conform themselves to its belief system under the guise of ‘integration’ and ‘multiculturalism’. However, once its patience has expired, it will not permit any real differences to exist within its societies.

Using the labels of ‘extremist’, ‘Islamist’, ‘papist’, ‘anarchist’, ‘radical’, ‘militant’ and ‘far-left’ it will systematically persecute, coerce and pressure its minorities to conform in belief and practice. Those Muslims who are adamant in publicly professing their beliefs and their practices unashamedly, it targets first. Although at first, it seems to tolerate those Muslims who, despite holding on to  ‘conservative beliefs’, but do not publicly advocate them or seek to practice them in the ‘modern world’ (whom it calls ‘moderates’). In the end, they too will suffer the same fate as their brethren; for Liberalism suffers not that beliefs antithetical to its world view, should live or have a place to hide for which they may re-emerge in future.

And in the end, the ‘Freedom’ of Secular Liberalism, only protects its own adherents.

‘Yet if all cannot be of one mind, as who looks they should be? To this doubtless is more wholesome, more prudent, and more Christian that many be tolerated rather than all compelled. I mean not tolerated popery [Catholicism], and open superstition, which as it extirpates all religions and civil supremacies, so itself should be extirpate, provided first that all charitable and compassionate means be used to win and regain the weak and the misled: that also which is impious or evil absolutely either against faith or manners no law can possibly permit, that intends not to unlaw itself’ [Areopagitica, by John Milton, credited as the English Enlightenment philosopher for first advocated ‘freedom of speech’]

‘That Church [e.g.. Catholicism] can have no right to be tolerated by the magistrate which is constituted upon such a foundation that all those who enter into it do thereby ipso facto deliver themselves up to the protection and service of another prince [e.g. the Pope]. For by this means the magistrate would give way to the settling of a foreign jurisdiction in his own country and suffer his own people to be listed, as it were, for soldiers against his own Government. Nor does the frivolous and fallacious distinction between the Court and the Church afford any remedy to this inconvenience; especially when both the one and the other are equally subject to the absolute authority of the same person, who has not only power to persuade the members of his Church to whatsoever he lists, either as purely religious, or in order thereunto, but can also enjoin it them on pain of eternal fire. It is ridiculous for any one to profess himself to be a Mahometan [i.e. Muslim] only in his religion, but in everything else a faithful subject to a Christian magistrate, whilst at the same time he acknowledges himself bound to yield blind obedience to the Mufti of Constantinople, who himself is entirely obedient to the Ottoman Emperor [i.e. Caliph] and frames the feigned oracles [i.e. Fatawa] of that religion according to his pleasure. But this Mahometan living amongst Christians would yet more apparently renounce their [Christian] government if he acknowledged the same person to be head of his Church who is the supreme magistrate in the state. [John Locke, Letter Concerning Toleration]

The European Court of Human Rights, judgement on the case of the Secular Republic of Turkey’s banning of the peaceful Islamic Refah Party:

It necessarily followed that a political party whose leaders…put forward a political programme which failed to respect one or more of the rules of democracy or which was aimed at the destruction of democracy and the flouting of the rights and freedoms recognised in a democracy could not lay claim to the Convention’s protection against penalties imposed on those grounds…The Court found that the acts and speeches of Refah’s members and leaders cited by the Constitutional Court…revealed Refah’s long-term policy of setting up a regime based on sharia within the framework of a plurality of legal systems…these plans were incompatible with the concept of a “democratic society”…the penalty imposed on the applicants by the Constitutional Court, even in the context of the restricted margin of appreciation left to it, might reasonably be considered to have met a “pressing social need” Press release – 3.2.2003

The European Court of Human Right’s Judgement on Germany’s banning of public gatherings by the peaceful Islamic group, Hizb ul Tahrir, whose stated goal is the establishment of an Islamic State only in the Muslim world:

‘As regards the association’s complaint that the ban on its activities breached its rights under Article 11, the Court referred to its case-law under Article 17 of the Convention (prohibition of abuse of rights). It had found, in particular, that the purpose of Article 17 was to make it impossible for groups or individuals to derive from the Convention a right to engage in any activity or perform any act aimed at destroying any of the rights and freedoms set forth in the Convention’. Press release – 19.06.2012

A passively tolerant society says to its citizens: as long as you obey the law, we will leave you alone. It stands neutral between different values. A genuinely liberal country does much more. It believes in certain values and actively promotes them…. It says to its citizens: this is what defines us as a society. To belong here is to believe in these things.

“In several European countries, it is widely maintained that Islam and Muslims are okay as long as they are not too visible. This attitude is prompting infringements of human rights and needs to be contrasted”, 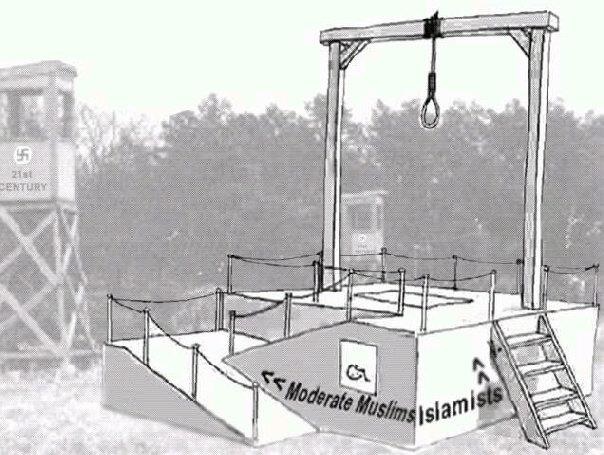 Like Loading...
‹ Tom Holland’s flight of Fantasy on Channel 4’s program on Islam
The shooting of Malala Yousafzai and the ‘Great Game’ ›