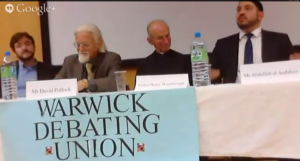 On Monday 25th November 2013, I attended a debate at Warwick University on the motion ‘This House Believes that Morality requires a God’. The panellists were Rev Henry Wansbrough (English Bible Scholar, General Editor of the New Jerusalem Bible, and Chairman of the Trustees of the Catholic Biblical Association), Andrew Copson, Chief Executive of the British Humanist Association, and David Pollock, Former president of European Humanist Federation; and former Chair of the Rationalist Association (Publisher of the ‘New Humanist’ magazine).

The debate was going to be two on two, with Rev Henry Wansbrough, my ‘wingman’ on my side arguing for the motion, and Andrew Copson and David Pollock would against the motion. The debate was organised by the Warwick Debate Union, a student run initiative for debate at the University of Warwick.

From the outset I knew this debate was going to be very difficult, I had heard that the university had a large Atheist/Humanist student society, and that the city of Warwick had an Atheist Society that were both going to attend this debate – consequently the debate audience was teeming with Atheists/Secular Humanists. However I find that debates are better when the audience is mostly not on your side, as this gives you the opportunity to persuade people who will not automatically sympathise with your position. The challenge was set.

I went first, arguing that for Atheists, the universe, or the concept of evolution, does not care about whether you are moral or not – in fact, morality is counter-intuitive to doing what is your best interests at times. In the universe, the only morality, the only right and wrong, is the possible and impossible. I argued that even if you think it is in an Atheist’s self-interest to set up a ordered society, it does not stop them for doing harm to OTHER societies if it is within their interests to do so (e.g. Viking raids, British and US colonial expulsions of natives etc) – and historically, it has been [of course I could have mentioned that there are also many reasons when doing harm to others, who are one’s opponents and rivals, within one’s society is within one’s interests but time was short].

Andrew and David both argued that Atheists can be moral, and argued that one need only look at how animals are moral without need of revelation (The Islamic position states that all animals follow their own natural law – which is specific for them). However, I pointed the audience to consider how animals like Chimpanzees and gorillas ALSO do what we would consider to be bad things as a norm, like violence, murder, sexual assault and even cannibalism. Who is to say that those things are not also ‘natural’ too. In the end it is only our received revelation that allows us to pick and choose which one of our ‘natural’ impulses are good, and which are bad.

Before the debate began, Andrew, David and I were in a room at the university reposing and waiting for Henry to arrive. When he did, he seemed a little confused – apparently he did not know what side of the debate he was supposed to be on! What makes matters worse is, he actually AGREED with the Atheists, that morality does not require a God! When he was told that he was meant to be arguing FOR the motion, he was reluctant to speak on something he didn’t believe in! Oh dear…

The rev. Henry Wansbrough was persuaded by the organisers to continue and participate in the debate, but would only argue that God is merely ‘helpful’ for people who want to be moral. However, during the course of the debate he announced his actual position and proceeded to concede arguments against the motion, with the Atheists/Humanist panellists all in mutual agreement! In essence, the debate turned into a three on one debate – this is what I call ‘wingman failure’.

During the debate I ended up having to refute some of Rev Henry’s arguments, for example he claimed that morality is deducible from looking at human nature, without need for a God. I counter-argued that humans are capable, and indeed prone to doing many kinds of actions, both foul and fair. How can we say one is natural, but the other is not natural as well? We are picking and choosing according to the pre-existing morality societies have, which of course, came from revelation. I started to get the feeling that Henry wasn’t entirely representative of the Christian tradition, especially when he responded to a question about Adam and Eve by saying that he didn’t take their existence to be literally true! In fact, after the debate one Christian chaplain and another Priest, came up to me and thanked me for my arguments, but noticeably didn’t thank rev Henry! (This might have been because they were Church of England, and not Catholics, but I doubt Rev. Henry’s beliefs represent Catholicism either!).

Andrew and David both argued that many Atheists have morals. However, I pointed out that humans are mostly conformists, who adopt the morality of their host society mostly without question. Atheists can be moral as long as they mentally compartmentalise their morals, and hold them as unquestioned dogmas. However, once Atheists do question ‘why’ they should be moral, they will be unable to produce reasons why – especially when they are tested with situations where being moral would completely disadvantage them against any interests they have (e.g. like being completely truthful on the CVs/Resumes).

I ended my final summary by drawing people’s attention to Nietzsche, who was a consistent atheist when he declared that ‘“[O]ur moral judgments and evaluations…are only images and fantasies based on a physiological process unknown to us”. One doesn’t have to be against Atheism to claim Atheism cannot produce morality, but rather, one can do so as an atheist too.

The debate ended with a vote, (there was no vote at the beginning to assess if anyone’s minds had changed) with the opposition narrowly winning by 13 votes, out of over 107 attendees. Although the audience held a high concentration of Atheists who were all members of the Humanist society on campus, I had hoped that perhaps some of them would have reconsidered. However I was encouraged by the conversation I had with Andrew and David afterwards, who apparently were unhappy with the result. They informed me that the university of Warwick was a highly secular institution, with a traditionally very secular student population, and that they expected a large majority of the students there to vote against the motion. A narrow win wasn’t what Andrew and David had expected.

It that is true, then I find it heartening that many of Warwick’s students had revised their thinking and had started questioning the secular narrative they were taught there about morality. A fire had certainly been started at Warwick university that day, and hopefully it will continue.

The video can be found here. Please watch the video, listen to both sides of the argument, and decide for yourself.

Like Loading...
‹ Upcoming Debate: ‘Can we be Good without God?’
Upcoming Debate on Is it right for Secular Society to limit religious expression? ›