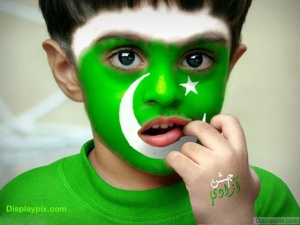 It was Pakistan’s ‘independence’ yesterday, and many Muslims in that region will be celebrating what they have been blindly taught to believe is a moment of pride for them. That a state for Muslims was created, based upon the principles of Islam – and never again would the Muslims of the region come under the dominion of foreign powers, or live in a state of insecurity.

A) With a Secular/Liberal elite (created from mentally colonialised ‘natives’ by the British Empire) controlling the Army and Government – and permitting the USA to use Pakistan for as its own personal playground for torture, kidnapping, murder and weapons testing; and

B ) with the enforcement of a Secular state with only a small number of now token un-enforced Islamic laws (dating back from the ‘Islamist’ General Zia ul Haq), and

– Sadly, they have failed to achieve all three aims…

Lastly, if we even look at how Pakistan got its independence – we see that it wasn’t as a result of a popular revolution, or insurgency against the British, but only as part of a law passed in British Parliament, to grant independence to both Pakistan & India. Pakistan’s independence wasn’t won by itself, it was decided then given to them by a bunch of politicians inside the UK Parliament. Britain wasn’t kicked out of the sub-continent, it merely was so weary from two world wars, it couldn’t sustain its empire any longer. But this was no different to every other Western empire. Virtually EVERY conquered country in the entire world was ‘given back’ to the natives peoples – with the exception being those colonies that were physically colonialised by large numbers white settlers – who massacred the natives so much, as to maintain their presence (Canada, Australia etc). India/Pakistan was simply too large, and with too many people to do that (hardly a pride-worthy achievement).

Pakistan got ‘independence’ not because it was special, but because every other ‘country’ got independence too – and only after Britain was assured that the country it would leave behind was a secular one. The prophet of Pakistani Nationalists, Ali Jinnah, ensured Pakistans compliance, by creating a secular state – after he had led the Muslims to believe it would be an state under Islam. That way, Britain could leave knowing its ‘civilising mission’ was complete, and more importantly maintain economic ties with an economically DEPENDENT country. Britain then got a country it could economically exploit, without the need to spend money on its military presence there – this was the birth of neo-colonialism – getting the natives to colonialise themselves. It seems outsourcing British services to india began long before the modern need for tech-support call-centres.

The power of British influence over it’s new ‘British Commonwealth’ club of ex-colonies didn’t last long, and was politically and economically usurped by the new rising global superpower – the USA, which leads us up to the present.

Of course, the question is, ‘what is pakistan?’. Well, if you went back in time 80 years, it didn’t exist. It’s borders of course, being drawn and agreed by a bunch of British politicians (probably over a glass of wine) – but that’s the point. Are we truly free merely because the prison guard leaves the prison, but still leaves us in a cage? And not just any cage, but a cage built into our own minds. Pakistan has no real existence. It is worse than children playing a fantasy role-play game. When children pretend to do something in a game, they at least know that it isn’t real. But the Muslims (yes, the Muslims – those part of a global Ummah that the Prophet (saaw) and God (swt) himself commanded upon us not to divide), actually have agreed to mentally separate themselves from other Muslims, and consider Pakistan to not only be real – but THEIR country.

Even right now, as you are reading this, tempers are raging, nostrils are flaring and rancour is emerging, as pakistani nationalists read this and feel they are being insulted and humiliated. Of course they would, Pakistani nationalism, like all nationalisms, is an emotional and irrational impulse, which serves as the religion of the secular age. Whereas our ancestors bound their communities based upon religion – secularists bind society based upon their ‘national identity’, and worship the ‘will of the people’. We as Muslims, reject such modern idolatry – but we should understand that those Muslims still under the spell of nationalism don’t know any better.

I should like to add, that it is not only Pakistan that is the problem, but also every Muslim ‘nation’ that was created as a prison for the minds of the Muslims – expressly to prevent our re-unification. I’ve have long criticised Iraqis, Egyptians, Libyans and Turks for their fanaticisms in worshipping a few lines drawn on a map – by a frenchman and an englishmen. Islamophobes say Muslims today lack an appreciation for art. But I can show you millions of Muslims worshipping, fighting and dying for a rectangular picture, merely for the existence of a few splodges of paint on it!

The British Agent (and political instigator), T.E.Lawrence talks of this when he discusses how to deal with the Arabs (specifically Sherif Hussein – who son became later the king of Iraq) against their Muslim brothers in the Ottoman Caliphate:

“His (Sherif Hussein) aim is the establishment of a Caliphate for himself [i.e. to rival the Turks], and independence for people speaking Arabic from their present irritating subjection to people speaking Turkish. His aims are thus in definite opposition to the Pan-Islamic party who are his strong obstacle (…) his activity seems beneficial to us, because it marches with our immediate aims, the break up of the Islamic block and the defeat and disruption of the Ottoman Empire, and because the states he would set up to succeed the Turks would be as harmless to ourselves as Turkey was before she became a tool in German hands. The Arabs are even less stable than the Turks. If properly handled they would remain in a state of political mosaic, a tissue of small jealous principalities, incapable of cohesion…If we can only arrange that his (Sherif Hussein) political change shall be a violent one, we will have abolished the threat of Islam, by dividing it against itself in its very heart”
-T. E. Lawrence, January 1916

The struggle for independence has not yet finished. What is not in dispute, was Muslims seeking refuge and the need for an Islamic power in the Indus Valley, but instead of creating an Islamic state, they got a another post-colonial secular state to suppress their Islamic aspirations. A land where Muslims can establish and live by Islam is still needed.  It is time we deposed the Secular oppressors over us, and look towards the re-establishment of Islam with the aim of unifying ourselves, and getting back to the Ummah’s great work – bringing justice, liberation and peace to the world.

My people are not the Portuguese, or the British, or the French, or the Madagascariense – the work of my ancestors means nothing. All that I have to my name, in the eyes of Allah (swt) are what scant good I may have done, and the belief in my heart. Hence I am a Muslim, and part of the Muslim Ummah bequethed to us by the Prophet Muhammed (saaw). The Prophet (saaw) shed his blood to unite the Aws and Khazraj politically under one state, and abolish the former identities they use to kill eachother over. I call out to you my brothers and sisters, to liberate yourselves as Allah (swt) liberated them. Its time for Muslims to free our minds, and reclaim our own destinies.

——————–
Three points to offset the typical counters from Secular Nationalists reading this.

1. Your Islam = Taliban and Mullahs.

No, just because I call to Islam, doesn’t mean I must be connected to those whom the West would like you to think are the exemplars of Islam. its not the Taliban that we should be afraid of, its the Secularist elite that are unafraid to use the Army, and CIA to kill and suppress far more than the Taliban ever could. The Secular governments of Syria, Egypt, Bangladesh and Pakistan have visited upon their own people far more death and destruction, than the ‘Two Students’ movement ever did or could.

2. Islam and ‘your mullahs’ = retrograde and technologically backward state

Really? Please tell that to the Iranians, who even though their state is a mix of various Islamic and non-Islamic systems (which I have criticised heavily), have, under the direction of the ‘Mullahs’, only one of two Muslim countries in the world to have built their own SPACE PROGRAM, and launch their own homemade satellites. How many Muslim SECULAR countries have done the same? Oh, thats right – None. Not a single Secular Muslim country has built a space program, nor has the same level and diversity of self-reliant technology base as Iran has. And all this it achieved DESPITE sanctions! Recently, Iran even offered to help Turkey to develop a space program – which is only a distinct possibility now, considering Turkey’s leader is also, yes, you guessed it, ‘Islamist’.

I also discovered, much to my shock, that Iran was the FIRST TO INVENT weaponised drones (and used them in the West-initiated Iran-Iraq war). And Iran was feted by numerous international scientific agencies and magazines for being the fastest scientifically developing nation in the world!

The other Muslim country with its own space program is Pakistan, but it admittedly did build its first space port with America’s help. Although the second spaceport was built under the ‘Islamist’ General Zia ul Haq – who was a technocrat. But as can be seen, if you want to get real and independent technological progress in the Muslim world, Secular leaders are just too retrograde to be a good choice…they prefer to be consumers for Western tech products (in exchange for payment in natural resources of course).

3. You are an Islamist

I only use the term based upon a loose set of identifyable features of people accused of it:

1. Someone who works for real independence for Muslims,
2. Is personally inclined towards Islam being connect to politics (but may be a gradualist),
3. and is someone that the West would use that the label to describe.

Like Loading...
‹ Secularism Debate with Terry Sanderson, President of the National Secularist Society (NSS)
Truth and the Fire ›